Ladies and gentleman! We have another winner!

G.CH Melodys Armed and Dangerous, owned by Mr. Roman Duellage and Ms. Dawn Benson, is an APF Pro dog and a gorgeous one at that! Recently G.CH Melodys Armed and Dangerous (aka Gunner) competed at Tualatin, taking Best in Show! This after a big showing at the AKC Eukanuba National Championship in Orlando, Florida in December. At the national show, the stunning Australian Shepherd received the 2nd Award of Excellence and finished 8th overall. 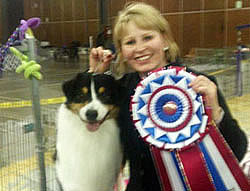 If you want to watch the AKC Eukanuba National Championship, it will be aired on the ABC television network on February 2, 2013. Check your local listings for time.