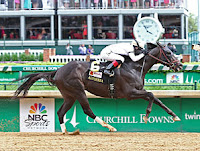 WinStar Farm announced that grade I winner and millionaire Take Charge Indy has been retired from racing after surgery to repair his left foreleg resulting from an injury sustained in the July 28 A.P. Indy will stand at WinStar Farm for the 2014 breeding season.

Monmouth Cup (gr. II). The son of A.P. Indy will stand at WinStar Farm for the 2014 breeding season.
Hall of Fame jockey Gary Stevens said he heard a “loud pop” when 3-5 favorite Take Charge Indy was leading the field by 1 1/2 lengths through a :47.43 half-mile. He quickly eased the 4-year-old.
“I was on the lead with a big smile on my face. He was cruising. The only question was how much would he win by,” Gary Stevens said.

The gallant horse handled the surgery to repair the fracture well and is expected to recover in fine shape.